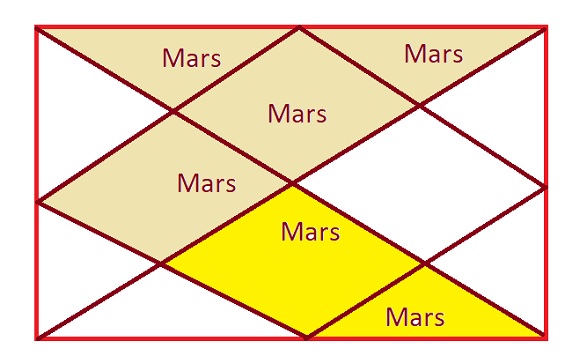 In the boy or the girl’s horoscope when Mars is in the ascendant, second house, fourth house, seventh house, eighth house or twelfth house then it is called Manglik or Kuja Dosha.
Mars is a red-hot planet and is karaka of anger, aggression and passion. It represents all forms of physical energies, including sexual. Mars plays an important role especially in married life because it signifies the energy or power. Manglik dosh is considered stronger when Mars is placed in the ascendant or when Mars is conjoined with Moon in the ascendant. According to the Shastras the Manglik dosh of both the boy and the girl’s canceled if they both are Manglik in their horoscopes.

Mars in Diffrent Houses of Manglik

Mars is a planet of aggression, power, domination, and kind of dictator in nature. That is why Mars in ascendant can make a person too bold, aggressive, or too dominating. He might want to be the all in all in his family, while not paying a good attention to what others [Or his spouse] are saying. He will be easily involved in fights and will express himself rather directly. He might be also of short temper. This causes the major problem.
When Mars placed in the first house in the horoscope then it aspect the houses 4 (Happiness, family life), 7 (Spouse, married life) and 8 (Marital tie) and thus create problem in all these areas with ease. He will quickly create fights on unimportant issues.

Mars in Second house create the problems in married life related to the family expansion and wealth after marriage. When Mars placed in the second house in the horoscopes it aspect to the 8th house by its 7th drishti and thus create issues related with marriage bond. Placement of Mars in 2nd house makes the person Manglik.

The fourth house is very important house in marriage life, it signify the domestic happiness after marriage, if mars placed in the 4th house if the native it creates imbalance or misunderstandings among the family members; issues related to the domestic harmony. Mars will cast his 4th aspect on the 7th house of spouse and marital life

Placement of Mars in 7th House makes the native Manglik or Kuja Dosh. The 7th house of the horoscope is responsible for marriage, marital peace, relationship with the spouse, happiness in marriage. When Mars is in 7th house, there will be clash and unhappiness in married life and this is perhaps the worst of all Kuja Dosha or major Manglik dosh. Mars being in 7th house may give violation in married life. In a female chart it might give physical or excessive mental torture from the husband. There will be also fight for the dominating power, and there might be lack of harmony in the sexual issues. It might give a short tempered spouse.

The 8th house rules marital tie or marriage bind between the couple, from the 8th house we see the possibility of death of the spouse. Mars is the planet of accident, operation and bleeding etc. therefore being Mars in 8th house may develop these issues. The spouse may cause death through accident or operation or any other mishap. This Manglik Dosha or Kuja Dosha also considers as major Dosha in married life.

12th house rules all kinds of losses and also the bed pleasure, i.e. sexual enjoyment in married life; It also indicated the secret love affairs. Mars here can give a native sickly desires or illegal unions with other people. Again, Mars will aspect the 7th house with its 8th aspect.
Next: PanchMahapurush Yoga →

Mantras are the sounds of POWER. Regular chanting of mantras with devotion and faith attracts the positive and...

Our eating habits are connected to the 2nd house and 12th house is the house of fasting. In fact, fasting is...

Yantra is a device that is used to neutralize the defects of different planets present in your horoscope....